How did past writers view their past, and their future? The following chart shows, year by year, how frequently all other years are referenced: 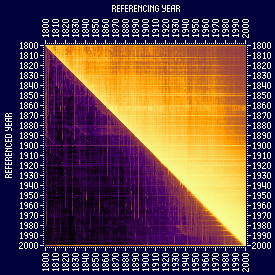 Google Ngrams shows us the frequency of phrases over time. Their standard example shows the increasing popularity of “Frankenstein” between the years 1800 and 2000. But what if, instead of phrases, we ask for how frequently a year is referenced, like the year “1848”? Then we can visualize, in one square, past writers’ views of time.

“Writing about the past” is marked by strong horizontal streaks: years which writers write more about. Most of them are decades, or markers for periods: “1900” is very strong, probably from references to that century.

But some specific years stand out as interesting. 1848 is strong: a year famous for a wave of revolutions across Europe. A band between 1860 and 1865 marks the American Civil War. 1914 marks the start of the First World War. A hotspot between 1812 and 1815 marks the Napoleonic Wars (not the 1812 Overture, which debuted in 1882). Unlike the American Civil War, the Napoleonic Wars seem to have faded from public consciousness: we don’t write much about those times any more.

“Writing about the future”, by contrast, is marked by horizontal, vertical, and diagonal streaks! What could all of those be? The horizontal streaks show interest in a future period. The streak along 1950 shows that writers as far back as 1800 were speculating about the period around 1950s. The vertical streaks presumably show single works writing detailed stories about the future.

Tagged #history, #programming. All content copyright James Fisher 2018. This post is not associated with my employer. Found an error? Edit this page.