BlazeFace identifies faces. This is great, but I want to identify something slightly different: heads. Here I show my method for calculating a bounding circle around a head, given only the facial landmarks. You can run it on your own face: to start a demo!

And here’s what I get when I run it against my own face: 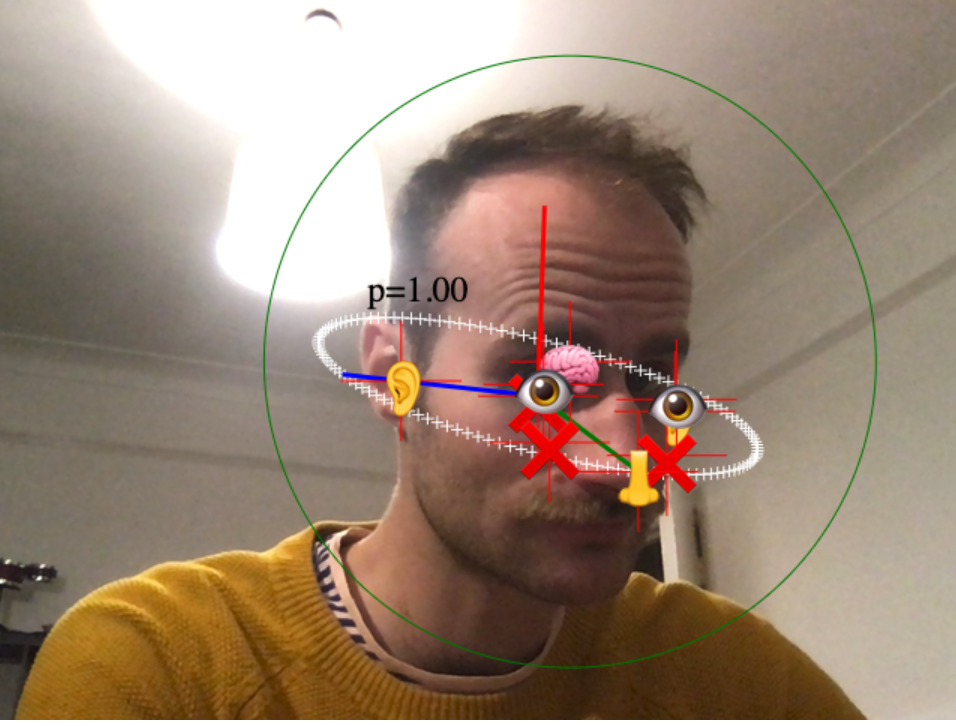 In a previous post, I showed the “hello world” of BlazeFace. It runs BlazeFace on your webcam video stream, takes the face landmarks and bounding box output by BlazeFace, and displays them on a canvas.

BlazeFace returns a bounding box, but it’s not clear what it is supposed to be bounding. For example, the box ignores the hair, chin, and cranium. It bounds the facial landmarks, though not precisely. Instead, I want a circle that bounds the head in the image. This circle will be the image of a sphere that tightly bounds the head in three dimensions.

Here’s an image illustrating the BlazeFace landmarks in magenta on a model head. BlazeFace doesn’t define exactly what it means by “nose”, “ear”, et cetera. And it’s inconsistent; e.g. when viewing my head from below, the identified “ear” points are quite far from my ears. Below, I’ve just marked the points that BlazeFace seems to identify most strongly.

I’ve labelled “L” for “left” and “R” for “right” on this image. Note that BlazeFace’s notion of “left” is on the right side of the image; it’s what you mean when you say “my left ear”.

I’ve fixed a coordinate system on this image. The origin of the coordinate system is the midpoint between the ears. The image shows x, y and z unit vectors. We can then define the 3D position of the facial landmarks that we will use:

Note that all these figures are only for the man in the drawing! Our model will have a bias towards this artificial man! We should try to find values that work for everyone, but I don’t try that here.

This assumption is wrong (the camera will have some kind of perspective view), but I think the error is small.

Our job now is to infer origin, unitX, unitY and unitZ. Conveniently, the origin of our coordinate system is defined as the midpoint between the ears. This can be calculated with no 3D math:

Next, notice that our z unit vector is, by definition, conveniently equal to the nose point at x=0, y=0, z=1. So we can calculate:

Finally we need to infer unitY. I believe it’s possible to infer unitY just from unitX and unitZ. Perhaps something like the cross product. However, my math sucks, so instead, I use the eye positions to infer unitY. We can calculate the projection of the model eyes on the xz-plane, like this:

Then the difference between these and the BlazeFace reported eyes tells us the direction of y:

Now that we have the origin and unit vectors, we can calculate the pixel position of the head center by projecting its world coordinate:

Tagged #programming, #web, #ml. All content copyright James Fisher 2020. This post is not associated with my employer. Found an error? Edit this page.